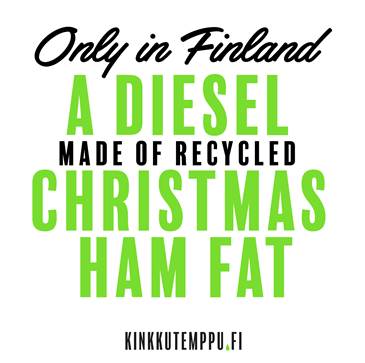 The first Ham Trick, held last year, was enormously popular. This Christmastime the campaign is going nationwide, and will once again add some extra verve to the holiday season. The aim is to collect and recycle ham waste fat from 100,000 households throughout the country for manufacturing renewable diesel. The proceeds of the campaign will be donated to charity. Taking part in the Ham Trick is even easier this year, as there are around 150 collection points throughout Finland. The campaign is the only one of its kind in the world, and demonstrates the potential of the circular economy. It also prevents the blockage of drains and sewage pipes, and helps protect the environment.

About 7 million kilos of ham are consumed in Finland every Christmas, creating a vast amount of waste fat. To avoid clogging drains, cooking fat must always be disposed of appropriately rather than pouring it down the drain.

Last year a completely new solution to the problem of what to do with Christmas ham fat was invented in Finland. The fat would be collected and used to manufacture renewable diesel, which, compared to conventional diesel, reduces greenhouse gas emissions by as much as 90%.

Around 40,000 Finnish households took part in last year's 2016 Ham Trick, providing a total of about 12,000 liters of cooking fat. The amount of Neste MY Renewable Diesel refined from this fat would be enough to drive four times around the globe. Proceeds of the Ham Trick campaign were donated to charity.

This year, the aim is to get 100,000 Finnish households to participate. If this goal is met, it will increase the donated sum to about EUR 20,000. These proceeds will be donated to the charity Hope, which provides financial support to low-income families. Hope also provides such families with used clothing and hobby equipment, for example. All donations to Hope are particularly welcome at Christmastime.

Whereas there were a total of 44 collection points last year, this year there will be around 150. Many of these will be in K Citymarkets, since every branch of the nationwide supermarket chain will have a collection point. Ham waste fat can also be delivered to some K-ruokakauppa grocery stores and Neste stations around the country, and to a total of 27 municipal garbage disposal companies. The collection period is from 20 December 2017 through 4 January 2018.

"Last year's Ham Trick proved that people in Finland are enthusiastic about recycling, as long as it's made easy for them. There are far more collection points this year, so the goal of getting 100,000 households to participate is ambitious but realistic," says Osmo Kammonen, Senior Vice President of Communications and Brand Marketing at Neste. "We use this waste fat at our refinery in Porvoo to produce Neste MY Renewable Diesel, which provides up to 90% lower greenhouse gas emissions compared to fossil diesel. We are able to produce renewable diesel and other renewable products from just about any kind of waste fat, grease or vegetable oil."

Finnish expertise in technology related to the circular economy is the world's best, and the Ham Trick campaign could not be implemented on the same scale anywhere else. The campaign is a joint effort between 14 organizations. The Ham Trick is a great example of circular economics in action, with new partnerships and cooperation playing an important role.

Neste (NESTE, Nasdaq Helsinki) creates sustainable choices for the needs of transport, businesses and consumers. Our global range of products and services allows customers to reduce their carbon footprint by combining high-quality renewable products and oil products to tailor-made service solutions. We are the world's largest producer of renewable diesel refined from waste and residues, and we are also bringing renewable solutions to the aviation and plastics industries. We want to be a reliable partner, whose expertise, R&D and sustainable practices are widely respected. In 2016, Neste's net sales stood at EUR 11.7 billion, and we were on the Global 100 list of the 100 most sustainable companies in the world. Read more: neste.com

The Ham Trick is a cooperative project initiated by the Chemical Industry Federation of Finland. The purpose of the campaign is to bring the circular economy closer to consumers by putting it into practice in a very concrete way. Consumers participate in the campaign by bringing their ham fat to collecting points, from where it is then taken to Neste Finland Refinery, Porvoo for using into renewable diesel. The goal is to get hundreds of thousands of Finnish households involved in the campaign. If this year's Ham Trick target is met, EUR 20,000 will be donated to the charity Hope, which helps low-income families. In addition to the Chemical Industry Federation, the other organizations behind the campaign are Neste, Lassila & Tikanoja, Honkajoki, Kesko Corporation, Finnish Packaging Recycling RINKI, Atria, HKScan, Snellman, the Rural Women's Advisory Organisation, the federation of garbage disposal plants Suomen Kiertovoima KIVO and municipal garbage disposal plants, the Association of Finnish Local and Regional Authorities, the Finnish Water Utilities Association FIWA, and Finnish Environmental Industries YTP. Kinkkutemppu.com (in Finnish).