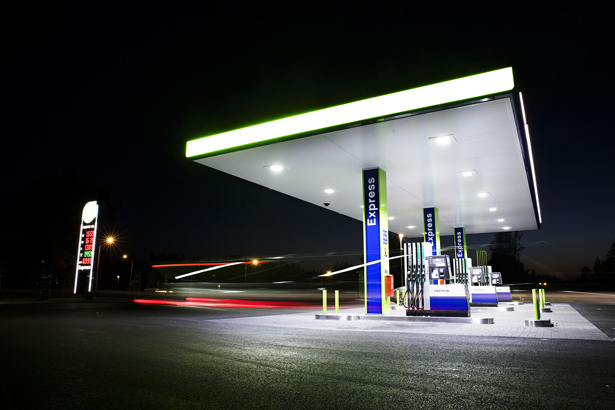 Neste Oil is facing a huge undertaking, which will provide savings of millions of euros in reduced electricity consumption. The lighting of stations and advertising signs will be replaced with LED technology. The benefits are immense, but the transition has not been trouble-free.

”First we were told that it is not possible,” laughs Project Manager Yrjö Rautio from Neste Oil.

Neste Oil did not give up, because few projects are this profitable and beneficial. Transition to LED technology can reduce the electricity consumption of the stations' lights by over 70 per cent.

”Lighting is the greatest consumer of electricity at the stations. When we switch traditional fluorescent lights to LED lights, the electricity bill of the entire station can be halved,” Rautio says.

”If the annual electricity bill has previously been EUR 7,000, in the future it will be EUR 3,500. With approximately 600 stations, this can provide significant savings.”

The savings will amount to millions of euros. There are also other benefits. An important reason for adopting LED technology is environmental protection. Cutting electricity consumption also means cutting emissions. The service life of LED lights is also longer than fluorescent lights, which reduces the need for maintenance.

The technology is ready now

”We estimated then that the technology is not yet reliable enough. It turned out to be the right decision. It later came out that the brightness of the LED lamps in question decreased fast, in just a few years.”

Now the situation is different. The brightness, durability and quality of LED lights have improved in huge leaps in recent years. When the time to change the fluorescent lights approached, Neste Oil decided to switch to the new technology.

However, in practice, replacing the fluorescent lights was quite a challenge, especially in the case of advertising signs.

”In the beginning people commented that advertising signs will never be bright enough if we use LED technology. True enough, in our first tests the LED signs were too dim.”

However, Neste Oil continued to test lighting solutions with a lighting provider.

”First we switched the plastic material of the advertising signs. Then we attached new kind of adhesive film to the plastic, designed to be used with LED lighting. The drop sign of the advertising totem also caused problems, because the colors have been made with silk-screen printing. We ended up using different colored LED lights to achieve the correct tones.”

There were all kinds of problems, but the end result is excellent.

”The color surfaces are as bright as before and the light surfaces are more even than before. The light at the stations has a good quality and the colors are clean. This is important for the brand image. We want that our stations are bright and look stylish”, says Rautio.

As many as 12 stations a week

During the first phase, Neste Oil will renovate the company's own stations. During the period of 2014–2016, automatic stations, commission stations and truck stations will be renovated.

The task is enormous, because old fluorescent lights have to be removed from all advertising light surfaces at the stations. They will be replaces with what are known as ”LED carpets”, which will be covered with dispersive lenses. The lights underneath the gas station roof will be replaces with LED lighting.

”We have eight lighting providers working in different locations in Finland. During the best weeks they manage to complete work at 12 stations,” Rautio says.

In the future, maintenance of the stations' lighting will be easier than before, because the service life of LED lights is longer than that of the older technology. The estimated service life of the LED lights in the advertising signs is as much as ten years. The lights on the gas station roof may last as long as 20 years.

Changing the lamps requires a lot of work and is expensive, but the savings in electricity consumption will cover the costs in approximately four years. After that, the lights will provide significant savings annually.

”So far our experiences have been good,” Rautio says. ”If everything goes smoothly, this will become a very good and profitable project.”