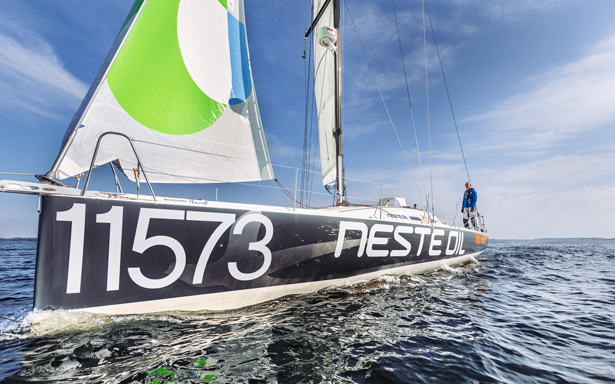 Solo skipper Ari Huusela and Neste Oil have agreed that Neste Oil will be Huusela’s main sponsor in this year’s legendary Route du Rhum single-handed transatlantic race. He will sail the Ariel with the Neste Oil name prominently displayed on his main sail and Neste Oil fuel on board to power essential equipment.

Determination, courage, and a belief in one’s abilities are key characteristics of Neste Oil’s partners. This year’s Route du Rhum will be the third single-handed across the Atlantic competition for Ari, and will call for precisely this type of commitment, making him an ideal addition to the Neste Oil story. Other figures to have featured in the company’s story previously – sharing Neste Oil’s belief that the only way is forward – include the astronaut, Buzz Aldrin, as well as the snowboarder, Antti Autti, and the ice hockey star, Teemu Selänne.

Work on preparing Huusela’s boat for the race has been intense over the past two summers.

“Everything we’ve done has had to be checked and rechecked two or three times,” says Huusela. “The autumn storms in the Bay of Biscay and the massive Atlantic itself are such big challenges that I need to be able to rely on my boat 100%. One of the most important factors ensuring that I cross the finishing line will be having enough energy. Sailing single-handed across the Atlantic calls for up to three autopilots.

“The navigation equipment, satellite link, and other onboard electronics all need electricity. Having the power to keep this equipment running is essential, and will be provided by a diesel battery charger and a hydrogenerator. I’ll be using Neste Pro Diesel for the diesel engine and Neste small-engine gasoline for the generator, as I know I can rely on products like these. A fuel-powered generator and solar panels will provide back-up power.”

The Route du Rhum, which takes place every four years, is one of the world’s most renowned single-handed yacht races. This year’s event, the tenth to be staged so far, will begin in Saint Malo in France on 2 November, and Huusela is expected to reach Guadeloupe in the Caribbean just over three weeks later.

“By partnering with Ari Huusela, we at Neste Oil want to continue our story and its emphasis on the importance of being a pioneer and acting boldly and courageously to stay at the top of your game,” says Neste Oil’s Marketing Director, Sirpa Tuomi. “We have been, and continue to be, a pioneering force in developing cleaner fuels, and partners like Ari help us communicate this message. Overcoming challenges and achieving your goals calls for a truly dedicated effort and always believing that you can do it.”