The panel of judges for Evento Awards, which are presented in recognition of professional event organizers, chose Neste Oil Rally Helsinki Battle as the best consumer event of 2014. The unique rally event organized in the center of Helsinki in July attracted a record number of spectators and exceeded all expectations.

The Evento Awards competition, which celebrates the best in the event industry, culminated in an award ceremony in Helsinki. The panel of judges comprised national and international experts in marketing communications and event organizing. 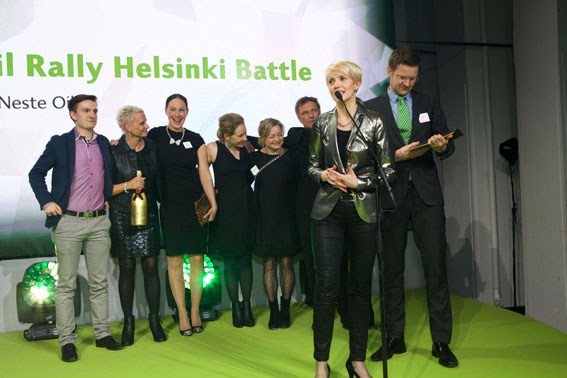 Evento Neste Oil’s Marketing Director Sirpa Tuomi admits that expectations for the event had been set extremely high, but they were still exceeded in all respects.

“We are a forerunner brand, and that is why our goal was to do something unique and unforgettable. We also owe a lot of gratitude for the success of the event to the WRC teams for their fantastic engagement and legendary rally drivers who backed the event wholeheartedly.”

The event inspired more than 32 million contacts on social media worldwide. According to Tuomi, the event’s spectators and rally fans from around the world have continued to share their praises long after the event.

There will be no repeat of Neste Oil Rally Helsinki Battle this summer.