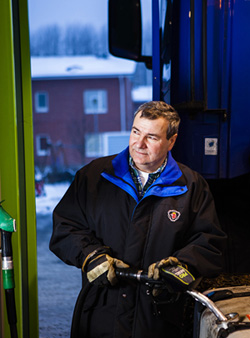 Fuels are being branded worldwide. Neste Pro Diesel is Neste Oil's contribution to premium-quality branded fuels. It is the world's first fuel to comply with the WWFC category 5 specification drawn up as part of the Worldwide Fuel Charter by automotive manufacturers. Neste Pro Diesel contains a minimum of 15% NEXBTL renewable diesel and is sold in Finland.

Thomas Schaarschmidt is the right man to talk about diesel fuel in heavy traffic. He has a pile of documents containing the fuel consumption of Schaarschmidt’s transportation company, K-Trans. The entries are standardised with German precision: there are numerous instances of driving along the same route between Finland and Denmark, with the same Scania R420, by the same driver – Schaarschmidt himself.

“There are notable differences between diesel fuels. My calculations reveal that Neste Pro Diesel has reduced both consumption and costs,” says Schaarschmidt.

Thomas Schaarschmidt has felt the difference between Pro Diesel and conventional diesels also in the cabin of his Scania.

What this means is that when filled up with Pro Diesel, the vehicle feels faster and more responsive compared to conventional, fossil diesel fuels.

“On the other hand, Pro Diesel is less vulnerable to changes of temperature, thanks to its enhanced cold properties,” the German says.

The advantages of Neste Pro Diesel have also been noted at Scania Suomi Oy in Tampere and at TÜV in Germany. Scania services Schaarschmidt’s truck, while TÜV inspects it, because the vehicle has been registered in Germany.

“This vehicle has not undergone a single fuel system renovation during its life-cycle,” Kasperi Koistinen, Customer Service Manager at Scania sums up.

“This is extraordinary for a truck with over a million kilometers on its odometer.”

In Germany, vehicle inspection includes an exhaust gas measurement, during which Schaarschmidt was asked to explain the exceptional results.

Neste Pro Diesel - The best diesel for any vehicle

Neste Pro Diesel contains a minimum of 15% of Neste Oil's renewable NEXBTL diesel. NEXBTL renewable diesel is classified as hydrotreated vegetable oil (HVO). In terms of its chemical composition, it is a hydrocarbon comparable to fossil fuel. As a result, it can be used as such in all diesel engines or blended with fossil diesel. It is also compatible with existing distribution and logistics systems and does not require any additional investments to be made to these systems.