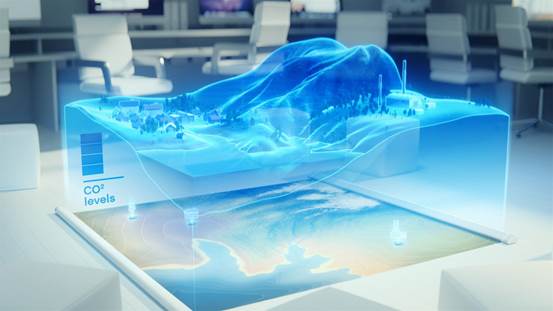 Technology is changing the way we think and focus. This change has generated a need to reshape education. Neste, the world's leading producer of renewable diesel, has released a futuristic education concept, EduCycle, that enables real-life simulation of the natural world and the carbon cycle's role in it.

EduCycle is part of Neste's Pre-order the Future project, in which one out of five products or service innovations will be chosen for further development in fall 2016. The winner will go forward to the prototyping phase and the final prototype will be published early 2017.

EduCycle is a modular learning kit built mainly out of renewable materials. It is an interactive, holographic simulation where children can alter the virtual landscape by playing with the moving parts of the kit. The first lesson of EduCycle will visualize the carbon cycle: Removing cars from the landscape or replacing coal power plants with wind power shows a positive change in the cycle. The simulation is enhanced with an augmented reality (AR) solution to create an even more immersive learning experience.

"EduCycle teaches kids to understand how their actions can change the world either for better or worse. Our planet's future is highly dependent on how we and our children will learn to manage our carbon footprint," says Osmo Kammonen, Neste's Senior Vice President of Communications and Brand Marketing.

Neste's Pre-order the Future project has been active since April 2016. The project's aim is to discover new ways of using renewable materials in the production of goods and services. The project focuses on product and service ideas within five topics: public spaces, entertainment, travel, learning, and mobility.

As the project advances, Neste's main goal is to create an actual innovation product that increases awareness of the possibilities of renewable materials. The public can vote for the best concept until September 2016 and the winner will go forward to the prototyping phase. The final prototype will be published early 2017.

The jury that will have the final say in choosing the winning concept consists of the American spoken word artist Prince Ea, Neste's President and CEO, Matti Lievonen, and Neste's Executive Vice President of Renewable Products, Kaisa Hietala.

Learn more about the Pre-Order the Future project and vote for the concept ideas on the official website www.neste.com/preorderthefuture.

Neste is a pioneer in oil refining and renewable solutions. We provide our customers with premium-quality products for cleaner traffic and industrial products based on world-class research. We are the world's leading producer of renewable diesel, and our annual production capacity is more than 2 million tons. We also are the world's largest company providing renewable fuel from waste and residues. Our sustainable operations have received recognition in the Dow Jones Sustainability World Index and the Global 100 list of the world's most sustainable companies, among others. Our net sales for 2015 amounted to approximately EUR 11 billion, and our shares are listed on NASDAQ Helsinki. Cleaner traffic, energy and life are moved forward by about 5,000 professionals. More information: www.neste.com/en