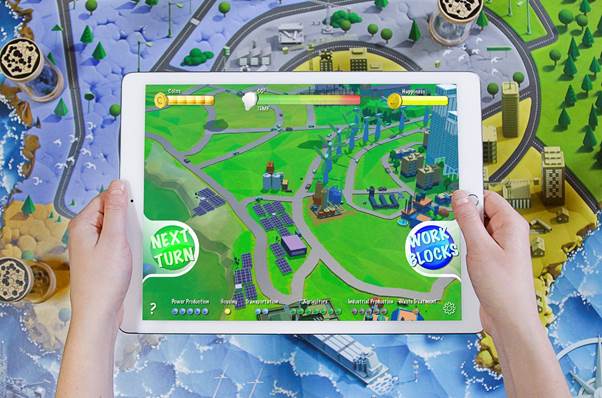 Based on the Paris Agreement on climate change, Neste's educational AR game EduCycle sets out to teach children about CO2 emissions

If the environment were a game, would we win? EduCycle, a new gaming platform that uses augmented reality (AR), teaches children ages 12 and up about the impact their decisions have on the environment. Designed and built by Neste, the game's challenge is to reduce the world's carbon dioxide emissions to the level specified in the 2015 Paris Agreement on climate change.

On March 30, 2017, Neste donated the first game to Lincoln High School in San Francisco. Representatives from the San Francisco Department of the Environment were also present. Heureka science center in Vantaa, Finland, will receive the game in early April. Similar organizations around the world have shown interest in the platform. 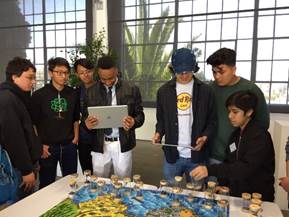 "San Francisco school students are some of our greatest environmental champions because they learn about the importance of protecting nature in the classroom," said DeborahRaphael, Director of the San Francisco Department of Environment. "Activities that help our students better understand the impacts of climate change offer meaningful opportunities for students to dig deeper and think even bigger about how they might make a difference for their generation and generations to come."

"Now that the first version of the game is ready, we're keen to hand it over to an interested third party for further development," Jeremy Baines VP Sales, Neste North America said. "The idea is to ultimately make it available to as many children and young people as possible, in a way that is both easy and affordable."

The beta launch of EduCycle is the culmination of Neste's year-long Pre-order the Future initiative. It aims to generate discussion on responsible alternatives and to develop bold and innovative solutions for sustainable products and services together with the public.

By taking advantage of AR and digital game logic, EduCycle simulates choices concerning energy, food and traffic affecting global carbon emission levels. Based on the environmental science of the Intergovernmental Panel on Climate Change, the game allows players to make choices using a physical map board, 3D printed markers and a mobile app which bring the resulting environmental outcomes to life in a virtual city, when viewed through an iPad. Thanks to its simple design, the board and pieces of the game can be printed out on a standard printer. In addition to the printouts, an iPad and the game's app is required.

"We wanted to create a fun but educational game that teaches kids, and adults too, about the factors impacting the environment," continued Baines. "As the game shows, making the right choices can be surprisingly difficult. Climate change is a serious issue, and we strongly believe education is one of the most important tools we have for positively affecting the future of our planet."

The game was conceived as a part of the Pre-order the Future initiative by Neste experts, TBWA advertising agency and the spoken word artist and passionate environmentalist Prince EA.

"I joined this project to create something that would be beneficial to the environment and the future," says Prince EA, who acted as the project's content creator. "EduCycle is an extremely innovative step towards a better future of learning and I'm excited to see what's in store for it."

The public also played an active role in developing the game's concept, and its prototype was tested by children both in Finland and in the U.S. The environmental science behind the game is based on research data by the IPCC (Intergovernmental Panel on Climate Change), while FAKE Oy, a Finnish digital animation and visual effects studio, is behind the game's programming and look.

Neste's renewable diesel has been used to cut greenhouse gas emissions in several California cities, including San Francisco, Oakland, Walnut Creek and San Diego, as well as the County of Sacramento, and for various public events, such as Super Bowl 50 in 2016. Additionally, renewable diesel is being used by corporations, such as UPS and Google.

Neste in Brief:Neste (NESTE, Nasdaq Helsinki) creates sustainable choices for the needs of transport, businesses and consumers. Our global range of products and services allows customers to lower their carbon footprint by combining high-quality renewable products and oil products to tailor-made service solutions. We are the world's largest producer of renewable diesel refined from waste and residues, and we are also bringing renewable solutions to the aviation and plastics industries. Neste made the Global 100 list of the 100 most sustainable companies in the world. Read more: neste.com

What are Pre-order the Future and EduCycle all about?
Discover more