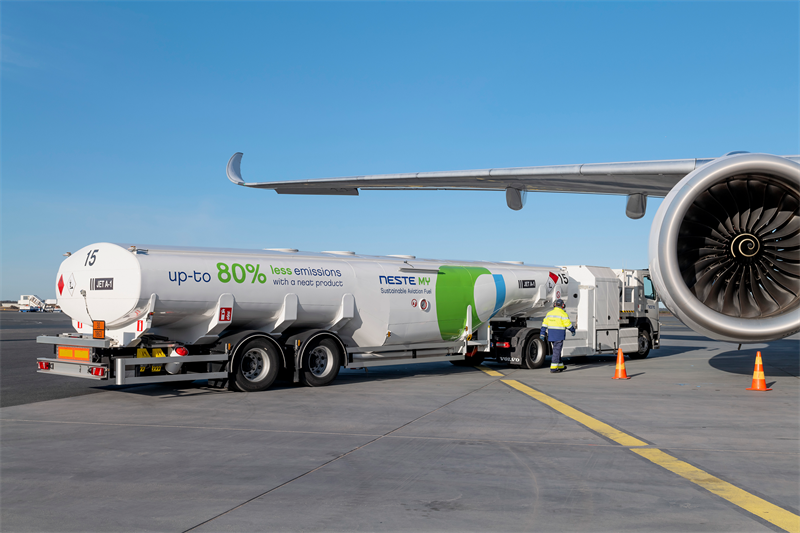 The Air France-KLM Group (AF-KLM) and Neste have announced the expansion of their existing cooperation with a new strategic partnership for the supply of Neste MY Sustainable Aviation Fuel™ to the Group. This new SAF agreement for a period of 8 years is one of the largest of its kind in the aviation industry to date.

Fully committed to reducing its environmental impact, the Air France-KLM Group aims to reduce its CO2 emissions per passenger/km by 30% by 2030 compared to 2019 – a target which has been submitted to the Science Based Targets initiative (SBTi). Its decarbonisation trajectory includes the incorporation of 10% SAF by 2030, alongside fleet renewal and eco-piloting. The contract with Neste, part of a first set of long-term supply agreements, constitutes a further step for the Group to achieve its 10% SAF incorporation targets.

“Neste is fully committed to helping the aviation industry achieve its 2050 net-zero carbon emissions target, and sustainable aviation fuel will play a central role in that effort. Today’s announcement, which marks a significant next step forward in our cooperation with Air France-KLM Group, underscores how we continue to support companies to reduce their greenhouse gas emissions. Neste aims to help customers cut emissions by at least 20 million tons of CO2e annually by 2030 with our renewable and circular solutions,” says Matti Lehmus, President and CEO of Neste.

"This landmark partnership with Neste is an important and concrete step towards the decarbonisation of our operations. This contract embodies our long-term commitment to the development of SAF's production capabilities around the world, to the benefit of the industry as a whole," said Fatima Gloria de Soussa, Director Sustainability, Air France-KLM Group.

The agreement builds on SAF supply to the Air France-KLM Group which started in 2019 but the two companies have been working together for several years with KLM being one of the first airlines using Neste MY Sustainable Aviation Fuel.

“As the world’s leading producer of SAF, we are helping the aviation industry to work towards a more sustainable future, already today. This long-term collaboration with Air France-KLM shows how we are working together in a number of areas. By the end of next year, Neste will have an annual SAF production capacity of 1.5 million tons, ready to support the Air France-KLM Group and other airlines in Europe and across the globe,” says Thorsten Lange, Executive Vice President, Renewable Aviation at Neste.

Neste MY Sustainable Aviation Fuel is an available solution today. As a drop-in fuel it can be used with existing aircraft engines and airport fuel infrastructure, requiring no new investment. Neste MY SAF is produced from 100% sustainably-sourced, renewable waste and residue raw materials, such as used cooking oil and animal fat waste.

*) When used in neat form and calculated with established life cycle assessment (LCA) methodologies, such as CORSIA methodology

A global player with a strong European base, the Air France-KLM Group’s main areas of business are passenger transport, cargo transport and aeronautical maintenance.
Air France-KLM is a leading airline Group in terms of international traffic on departure from Europe. It offers its customers access to a worldwide network, covering over 310 destinations thanks to Air France, KLM Royal Dutch Airlines and Transavia, mainly from its hubs at Paris-Charles de Gaulle and Amsterdam-Schiphol.

Its Flying Blue frequent flyer programme is one of the leaders in Europe with over 17 million members.

Together with its partners Delta Air Lines and Virgin Atlantic, Air France-KLM operates the largest transatlantic joint venture, with more than 340 daily flights in 2019.
Air France-KLM is also a member of the SkyTeam, the alliance dedicated to providing passengers with a more seamless travel experience at every step of their journey 18 member airlines working together across an extensive global network.

Recognized for 18 years as an industry leader in sustainable development, the Air France-KLM Group is determined to accelerate the transition to more sustainable aviation. Since 2003, the Air France-KLM Group has been a member of the United Nations Global Compact. The aim is to make a significant contribution to the UN Sustainable Development Goals in connection with the Group’s activities.