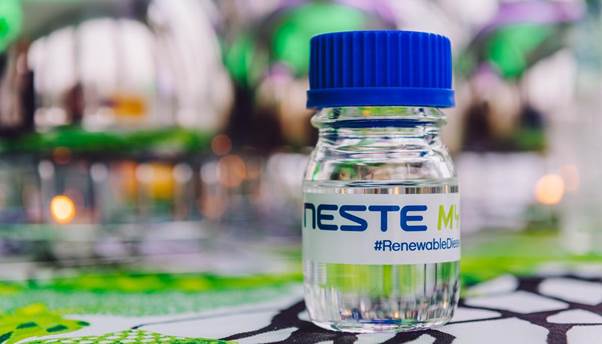 Neste is the world's leading company producing renewable diesel from waste and residues. Its low-carbon Neste MY Renewable Diesel refined from renewable raw materials helped its users replace conventional diesel and reduce carbon emissions by a staggering 6.7 million tons in 2016. The amount equals the permanent removal of 2.4 million passenger cars from the roads for one full year.

"With Neste MY Renewable Diesel, any environmentally-conscious driver of a diesel-powered vehicle can instantly reduce the carbon footprint of his or her transportation. The use of this fuel does not require any vehicle-related investments or modifications. It is suitable for all diesel-powered passenger cars, as well as for use in heavy transport, such as in buses, garbage trucks, emergency vehicles, and long-haul trucks, among others," explains Kaisa Hietala, Executive Vice President, Renewable Products at Neste.

"More and more companies have taken the steps forward to reduce their carbon footprint with our renewable fuels. Google gBuses and UPS delivery trucks, for example, already run on our renewable diesel," Hietala adds.

As also the tailpipe emissions of Neste's renewable diesel are smaller than those of conventional diesel, the benefits of the fuel use become particularly concrete in situations where people are exposed to local emissions, such as particulates or nitrogen oxides (NOx), from diesel-powered vehicles or machines. Neste's renewable diesel has been used to cut also these emissions, for example, in several Californian cities, at the Hamburg International Airport, as well as in various public events, such as Super Bowl 50 in 2016.

Neste increased the production capacity of its renewable products from 2.4 million tons to 2.6 million tons during 2016. Simultaneously the company increased the share of waste and residues to account for nearly 80% of its raw material use in the refining of renewables. The renewable diesel produced from waste and residues can cut greenhouse gas emission by up to 90% compared to conventional, crude oil based diesel. The aim of the company is to increase the total annual greenhouse gas emission reduction volume to 7 million tons in 2017 with its renewable products.

Read also:Are local emissions of diesel cars as bad as claimed?What is the difference between renewable diesel and traditional biodiesel?

Neste in brief Neste (NESTE, Nasdaq Helsinki) creates sustainable choices for the needs of transport, businesses and consumers. Our global range of products and services allows customers to lower their carbon footprint by combining high-quality renewable products and oil products to tailor-made service solutions. We are the world's largest producer of renewable diesel refined from waste and residues, and we are also bringing renewable solutions to the aviation and plastics industries. We want to be a reliable partner, whose expertise, R&D and sustainable practices are widely respected. In 2016, Neste's net sales stood at EUR 11.7 billion, and we were on the Global 100 list of the 100 most sustainable companies in the world. Read more: neste.com/en